Simon struggled with addiction for over 20 years 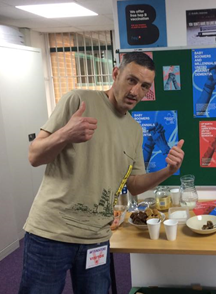 Simon struggled with addiction for over 20 years.  On his last release from prison he came to Foundations. When he arrived Simon’s goal was to be “out of treatment as soon as possible.”

After settling in and stabilising on medication Simon said “it felt like the fog had been lifted.” He was offered a place on a group programme, which at first he was reluctant to attend but once he tried it he quickly felt it was helpful. People sharing recovery journeys helped him talk about his own addiction. Simon continued with the group programme and began to reduce off his methadone. He said that it was hard coming off but being with people with a shared understanding of cravings and triggers really made a difference and with their support he began to develop ways to cope with life’s ups and down without turning to drugs. 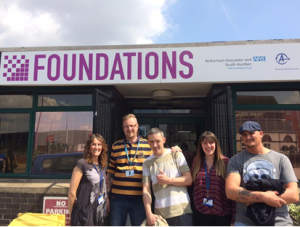 Simon began to rebuild his life and to develop a network of friends and support outside the service. He started volunteering at Harbour Place food kitchen and Probation service and was then put forward as a peer mentor with Foundations. As a peer mentor Simon volunteered with Foundations four times a week to support others, sharing his experiences of addiction and recovery and offering advice.

Service users who had known Simon before he came to Foundations were truly shocked to see how far he had come in his recovery he was a role model and evidence that recovery is real and possible.

As his confidence grew Simon felt happy applying for jobs and was successful in getting a full time permanent position.